Home Blog The Charm of Baltimore City’s Circulator: Free, Reliable Transport that Low-Income Individuals Can Depend On

The Charm of Baltimore City’s Circulator: Free, Reliable Transport that Low-Income Individuals Can Depend On

As a daily patron of the Circulator’s Purple Route, and having occasionally used the Green and Orange routes, I can attest firsthand to the unique value of the Circulator. The Circulator is an asset to Baltimore City and represents a true public transport success story from which valuable lessons can be learned. Rather than cutting service, the City should work towards expanding this great resource. 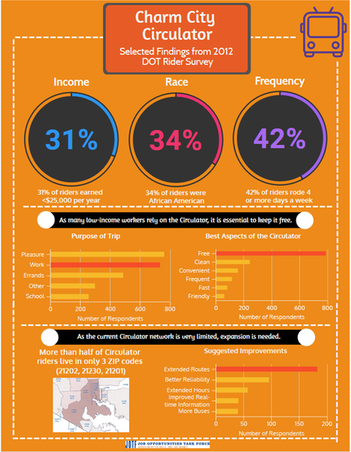 Since the Circulator is free, it is the most equitable form of public transportation in Baltimore. In a city where nearly 20% of families live below the federal poverty level[1], free transportation is a much-needed resource. A survey of Circulator riders commissioned by the City’s Department of Transportation in 2012 found that 31% of riders have an annual household income below $25,000, and that implementing a fare on the Circulator would not be feasible. The Circulator routes also increase connectivity by providing City residents with greater access to downtown and the Inner Harbor (Purple and Banner routes) – key resource-rich areas and economic hubs of the city – and bridge the significant geographic divide between East and West Baltimore (Orange and Green routes).

In addition to affordability and connectivity, reliability may be the Circulator’s biggest strength. Due to the use of NextBus technology, Circulator riders with access to a smartphone or internet connection can view real-time information to predict when the bus will arrive. While there is a margin of error for predictions, no other form of public transport in Baltimore City even offers such user-friendly, real-time information. As a result, the Circulator may be the most viable form of public transport in Baltimore City. Such reliability is exactly why the Circulator is frequented by students, white-collar workers and visitors alike. Its success is clearly illustrated by the diversity and number of riders. The infographic above illustrates the demographics of riders and high demand for preserving and expanding the Circulator[2].

For low-income workers who live and work near the Circulator routes, the Circulator is a saving grace. Given the many costs and barriers associated with obtaining and maintaining a driver’s license and vehicle, 30% of City households do not have a vehicle available for personal use[3]. Census data from 2010-2014 show that 18.2% of Baltimore City residents used public transportation to commute to work[4]. However, the utility of the current public transportation system is limited, due to cost and a limited network. In a 2013 study of barriers to employment where 1,000 jobseekers in the Baltimore region were surveyed, inability to afford a bus ticket was among the top 10 barriers reported. The cost of public transportation in Baltimore as a percentage of income for low-income residents is high.

In a city whose current public transportation system is plagued by affordability, accessibility and reliability issues, policymakers should be focused on preserving and expanding the components that do work. Improving the transportation system is essential to the future economic security of the City and its residents. The Circulator meets an essential need for the workers who live in proximity to its routes – especially low-income workers who often lack job security and flexibility, whose very survival therefore depends on a reliable and accessible form of transport to get to work on time. The Circulator should be viewed as a model to be expanded to fill the existing gaps in the regional transportation system. If expansion of the Circulator enables low-income residents to secure and maintain employment, it will not only benefit individuals, but the City as a whole.

The City’s significant investments into the Circulator have made it Baltimore’s best example of a model of public transportation that truly works for consumers. The City should recognize the value that this system adds to the lives of residents and workers. Priority should be given not only to preserving the Circulator, but using it as a best practice model to replicate and improve public transit in the Baltimore region as a whole.