JOTF recognizes that a healthy state economy requires policies that meet the workforce needs of employers and promote fair and equitable access to economic opportunities for low-income Marylanders.

The JOTF Policy Team will continue to maintain a regular presence in Annapolis to promote policies that seek to improve conditions and outcomes for Maryland’s working families. JOTF’s public policy priorities are numerous but our focus falls within the following categories:

Reducing the impact of incarceration on workers

JOTF advocates for legislative and budget proposals that improve the economic opportunities of Maryland’s low-skill, low-income workers and their families. Our public policy advocacy efforts recognize that a healthy Maryland economy requires laws and policies that meet the workforce needs of employers and promote fair and equitable access to economic opportunities for low-income Marylanders.

This session, the Maryland General Assembly was temporarily adjourned before its scheduled April closing date due to the global COVID-19/Coronavirus pandemic. Depending on the impact of the virus transmission, the legislative session is expected to resume in May to allow the legislature to continue any unfinished business.

During the 2020 state legislative session, JOTF supported the following legislative and budget initiatives on behalf of low-wage, low-skill workers and job-seekers in Maryland:

Everyone deserves the opportunity to care for themselves and their families in times of sickness, childbirth, domestic violence, or any health challenge without risk to their economic security and stability.  For six (6) years, JOTF partnered with over 150 organizations around the state to pass the Maryland Healthy Working Families Act for low-wage workers in need of earned or job-protected sick and safe leave. This law went into effect in February 2018. Yet every year since the law took effect, JOTF and partners have fought against efforts to repeal provisions of the law and exempt workers such as substitute teachers, healthcare workers, and seasonal workers.

Given the COVID-19/Coronavirus pandemic impact during the legislative session, there was a rush to close schools, businesses, limit social gatherings, and eventually, restaurants, bars, and shopping centers to limit virus transmission. This led to a renewed focus on protecting the safety net for our vulnerable residents, specifically low-wage workers.

As a result, emergency legislation was passed to provide the necessary support to workers experiencing layoffs and businesses struggling due to the shutdown before the legislature officially adjourned. These efforts included expanding access to paid sick and safe leave under the Maryland Healthy Working Families Act and to unemployment insurance benefits for unemployed and displaced workers. These efforts that would take effect immediately. A brief description of each is below:

JOTF continued to defend aggressively, monitor, and provide oversight of the implementation of the Maryland Healthy Working Families Act (MHWFA). We managed to eliminate five (5) separate bills seeking to jeopardize the MHWFA:

Decriminalizing Poverty – Reducing the Impact of Incarceration on Workers

JOTF knows that a criminal record can serve as the cause and consequence of poverty, even if it does not include a guilty conviction. In 2018, JOTF released its groundbreaking report, “The Criminalization of Poverty: How to Break the Cycle Through Policy Reform in Maryland.” JOTF defines “the criminalization of poverty” as state laws, policies, and practices that unnecessarily penalize the poor.  The report examines state laws and policies that criminalize and penalize poor communities of color and provides policy recommendations to dismantle these practices and systems. This includes policies that facilitate regular interaction with the criminal justice system through racial profiling, child support debt, motor vehicle laws, court-related fines, and fees; and the collateral consequences of the criminal record.

During the 2020 state legislative session, JOTF supported the following proposals to decriminalize poverty and reduce the impact of incarceration on workers:

The educational and training systems operating within most correctional institutions are a vital component of inmate rehabilitation. Maryland’s mandatory education law requires inmates to enroll in educational or workforce skills classes. Inmates must participate for a minimum of 120 days, but many never complete the program. Studies have shown that recidivism rates for inmates with a high school diploma/GED or college degree is 7.9% less than inmates overall.

Therefore, the state of Maryland should encourage individuals currently incarcerated to not only participate, but to complete an educational or and/or vocational program to better facilitate a successful reentry upon release from incarceration.

A significant majority of noncustodial parents are un- or underemployed but are assigned unrealistic child support orders that do not fully take into account their financial constraints and demands. When parents are unable to pay, punitive collections enforcement measures and penalties have employed that result in insurmountable barriers to employment. These policies and practices further impoverish and criminalize low- or no-income noncustodial parents, which also diminishes their ability to meet child support obligations.

During the 2020 state legislative session, JOTF supported the following proposals to reduce the punitive impact child support has on low-wage workers:

The 2018 midterm elections saw alarming reports of voter suppression across the country. Often excluded in these reports are a segment of our population that remains unseen: incarcerated, yet eligible voters. Maryland is one of the few states that have restored voting rights to individuals with a felony conviction. Most, however, are unaware that they have obtained their voting rights. Additionally, those individuals who are incarcerated while pending trial – known as pretrial defendants – and individuals convicted solely of a misdemeanor offense lack access to voter registration resources. The Job Opportunities Task Force is steadfast in ensuring that disenfranchised citizens in Maryland have access to the electoral process.

If you are interested in supporting our efforts or have questions about certain legislative initiatives, please don’t hesitate to contact us at (410) 234-8040 or send us an email at info@jotf.org. 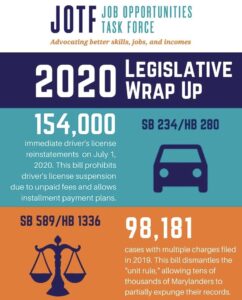 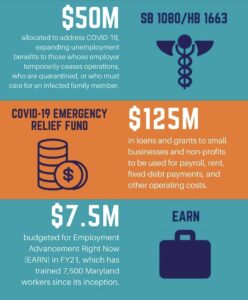 Be the first to know

Our weekly emails provide updates on legislation, budgets, and other state-level policy news that impacts working families in Maryland.