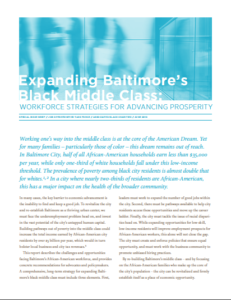 Working one’s way into the middle class is at the core of the American Dream.  Yet for many families – particularly those of color – this dream remains out of reach.

In Baltimore City, half of all African-American households earn less than $35,000 per year, and the prevalence of poverty among black city residents is almost double that for whites. In a city where nearly two-thirds of residents are African-American, this has a major impact on the health of the broader community.

This report describes the challenges and opportunities facing Baltimore’s African-American workforce, and provides concrete recommendations for advocates and policymakers.

A comprehensive, long-term strategy for expanding Baltimore’s black middle class must include three elements: expanding the number of good jobs within the city, building pathways to help low-skill workers access these jobs, and reducing employment discrimination.

By expanding economic opportunity for all, we can take a major step towards building a more dynamic city.

This issue brief has laid out three key avenues for action, and strategies for improving workforce outcomes within each:

Investing in Baltimore’s Workforce: Leveraging Opportunity and Moving to Scale

A Young Workforce At Risk: Re-Connecting Out-of-School and Out-of-Work Youth in Maryland

The Facts on the Federal Recovery Act: The Impact on Low-Wage Marylanders & Principles for Implementation