JOTF proudly kicks off its celebration of National Expungement Week

Today, Monday, September 21st, 2020, kicks off the third annual National Expungement Week! Started in 2018 in Washington DC by a coalition of nonprofits, the celebration seeks to shine a light on the systemic injustices perpetrated against those individuals who have an interaction with the criminal justice system and then are prevented from successfully reentering into society.

According to the National Employment Law Project (NELP), 1 in 3 Americans – 70 million Americans – have some sort of arrest or conviction record that appears in a routine criminal background check. For low income workers, the record can be a key determinant in whether or not they can secure employment, housing, admission to a job training program, college, and other critical resources. For years, JOTF has seen the devastating impact of the criminal record on low income workers, particularly Black workers, and has advocated for an expungement process that is accessible, fair, and allows everyone who wants it to benefit from a second chance. We are clear that robust expungement reform is a key tool that will benefit the many communities that have been criminalized as a result of their poverty and race.

Check back throughout the week to learn more about Maryland’s expungement process and how JOTF is working to ensure equitable reforms to our state expungement laws! 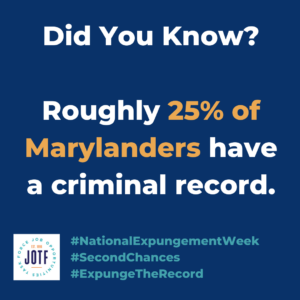 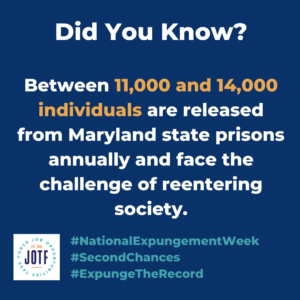 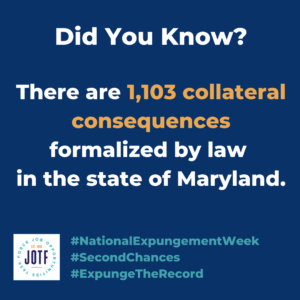