JOTF’s Board Vice President, Adam Abelson has been named to The Daily Records 2020 VIP List

JOTF is proud to announce that our Board Vice President, Adam Abelson has been named to The Daily Records 2020 VIP List. 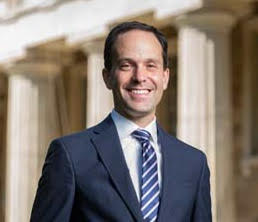 Adam is a Partner at the law firm of Zuckerman Spaeder LLP. He recently was part of the 2019 team that convinced a federal court to rule that United Behavioral Health had wrongfully denied coverage for mental health and substance abuse treatment for more than 50,000 class members. He was also vital in the defense of Gregory Craig, White House counsel for President Barack Obama, in a 2012 criminal case. Adam examined several witnesses and argued evidentiary issues which lead to Craig’s acquittal by a jury after just a few hours of deliberation.

When asked about his service on the board of JOTF, Adam said “I consider barriers to reentry for returning citizens to be one of the core challenges for Baltimore. I am pleased and inspired to be part of an organization that is attacking those barriers in a strategic, long-term and multidimensional way.”
Read the full article and write up here:
https://thedailyrecord.com/2020/09/16/adam-b-abelson/