As the Maryland General Assembly reconvenes today for the 90-day state legislative session, JOTF recognizes that a healthy state economy requires policies that meet the workforce needs of employers and promote fair and equitable access to economic opportunities for low-income Marylanders.  We look forward to advancing the following public policy priorities during the 2016 state legislative session. 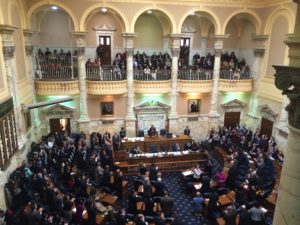 Everyone gets sick and everyone deserves time to recover without risking their economic stability, yet 40 percent of American workers are unable to earn paid sick days.  Amongst low-wage workers, the people who can least afford to take unpaid time off when sick, nearly 80 percent lack access to this basic benefit.  In Maryland, more than 700,000 of our neighbors are forced to make impossible choices: go to work sick, send an ill child to school or daycare, or stay home and sacrifice much-needed income or, worse, risk job loss.  Marylanders need a basic standard guaranteeing their ability to earn paid, job-protected sick days.  The Working Matters coalition, of which JOTF is a founding member, will reintroduce the Maryland Healthy Working Families Act in 2016.  The proposed legislation would allow workers to earn one hour of paid sick leave for every 30 hours worked, up to a maximum of seven days per year for full-time workers.

The ability to secure gainful employment is crucial to the successful reentry of those returning to society from prison.  Research shows that recidivism risks are highest in the first 3-5 years following incarceration.  A study funded by the National Institute of Justice examined more than 80,000 criminal records and found that there is a way to actuarially estimate a point in time when an individual with a criminal record is at no greater risk of committing another crime than other individuals of the same age.  Given that recidivism declines steadily with time clean, JOTF will support legislation in 2016 that would allow for the expungement of certain nonviolent drug convictions after a specified waiting period.

A significant number of Maryland job-seekers do not benefit from laws that would allow them to clear their criminal records because they are unaware of how to access expungement or cannot afford the required court fees.   To ensure that all eligible Marylanders can access expungement services, JOTF will support legislation that would allow for the automatic expungement of certain non-convictions after a required three-year waiting period, or sooner under specified circumstances.

Mobility is a vital factor for working families, yet the insurance industry practice of “territorial rating” means that urban drivers pay considerably more for car insurance than other Maryland residents.  The lowest-wage Baltimoreans tend to face the highest rates of all – largely regardless of their personal driving histories.   JOTF is also concerned by the key role that consumer credit histories play in setting auto insurance rates.  As members of the state’s Task Force to Study Methods to Reduce the Rate of Uninsured Drivers, JOTF will encourage policymakers to consider how low-income residents are impacted by insurance industry practices, and will closely monitor any legislation that may arise in 2016 as a result of Task Force recommendations.

Increasing access to post-secondary education can strengthen Maryland’s families and communities and improve outcomes for the working poor, especially as workers with college experience are more likely to move out of poverty and attain higher-paying jobs.  The poverty rate drops from 14 percent among Marylanders with a high school credential to less than 5 percent among Marylanders with at least some college experience.  Unfortunately, low-income and non-traditional students face the greatest barriers to post-secondary completion, and affordability is high on the list of challenges.  While federal student aid plays a major role in college financing, state policy ultimately drives the cost of college.  JOTF will encourage the State to drive program innovation and direct state aid resources to the students who need them most.  Specifically, we will work to support legislation aimed at expanding need-based aid to include non-credit credentials that are essential to workforce certifications.

Maryland’s low-income workers need access to training in order to advance in the workplace and obtain jobs with family supporting wages.  As employers seek workers with specific skills, it is crucial for the State to increase its investment in adult basic education, training and hiring, and to develop clear employment pipelines that allow low-skill and hard-to-employ workers to advance through training and into the workforce.  JOTF will support proposals that seek to increase funding for workforce training and adult basic education programs that will upgrade the skills of entry level and incumbent workers, and expand state policies to increase employment opportunities for low-skill adults through public works expenditures.

Established as a result of 2015 legislation, Maryland’s Justice Reinvestment Coordinating Council consists of a bipartisan group of lawmakers, senior-level government officials, attorneys and law enforcement representatives charged with pursuing justice reinvestment strategies to make better use of prison resources.  The Council worked to revise Maryland’s sentencing and prison policies in a way that controls costs and maintains appropriate responses for the most serious offenders while reducing incarceration for those with less dangerous offenses.  As a Council member, JOTF will continue to encourage policymakers to consider the impact of incarceration and the resulting criminal record on employment when advancing Council recommendations through the legislature.  We will continue our participation in the Council and closely monitor related legislation that may arise in 2016 as a result of Council recommendations.

Thousands of low-income non-custodial parents have accumulated unpayable child support arrearages as a result of a change in their economic status, such as joblessness or incarceration.  In 2012 JOTF successfully worked with partner organizations including DHR’s Child Support Enforcement Administration and DPSCS to educate policymakers on the importance of suspending child support orders for incarcerated individuals.  Under the new law, individuals who are sentenced to at least 18 consecutive months of imprisonment and do not have the financial capacity to pay will have their child support order automatically suspended upon incarceration.  During the 2016 legislative session, JOTF will seek to gauge a better understanding of whether this policy has been implemented effectively.  In addition, in an effort to address policies that often serve as a disincentive for non-custodial parents to engage in mainstream employment, we will also consider potential initiatives regarding wage garnishment and driver’s license suspension with the ultimate goal of establishing solutions that balance the needs of low-income families with the concerns of the State.

Nearly half of all working Americans do not have access to a retirement savings plan at work, and over half of the bottom 50 percent of wage earners have no retirement savings at all.  Legislation to create a publicly administered retirement savings program for private-sector Maryland workers whose employers don’t offer a retirement plan failed to advance in 2014, and the Governor’s Task Force to Ensure Retirement Security for All Marylanders was subsequently established.  JOTF will continue its participation in the Task Force and will closely monitor legislation that may arise as a result of Task Force recommendations.

While the 1993 passage of the federal Family and Medical Leave Act represented a victory for working families, the unfortunate reality is that far too many remain unable to utilize FMLA because they simply cannot afford the unpaid time away from work.  Currently, only 11% of the nation’s workers have access to paid family leave through their employers.  The proposed Family and Medical Leave Insurance Program would provide insurance for workers who need to take leave to care for a newborn or newly adopted child, care for a family member with a serious condition, or care for their own serious health condition.  The program would operate similar to unemployment insurance by requiring qualified individuals to pay a portion of a contribution rate during a certain period from which benefits would then be calculated and paid.

Abusive scheduling practices in low-wage jobs are becoming increasingly prominent.  The lack of control over timing of work hours, schedules that are last minute, hours that fluctuate radically from week to week or month to month, involuntary part-time work, and nonstandard schedules can lead to catastrophic consequences for low-wage workers who are often left scrambling to arrange child care, transportation, and the schedule at a second job.  JOTF is likely to support scheduling legislation that may be introduced in Maryland in 2016 aimed at reducing the negative consequences for both workers in low-wage jobs and their children.

Maryland’s refundable EITC works with the federal EITC to help 400,000 working families throughout Maryland make ends meet and stay out of poverty.  Unfortunately, these credits do little to make work pay for those without dependent children, including many low-income younger workers.  The proposed credit expansion could result in up to $503 annually per worker, helping to ensure that these young people are more likely to remain afloat as they begin in the workforce.

In addition to the importance of post-secondary access, JOTF recognizes that nearly one million working-age Maryland adults lack a high school diploma. Increased education could help many of these workers move into high-demand, better-paying jobs.  Unfortunately, many of these workers face challenges in obtaining education credentials due to time spent behind the fence.  To ensure that incarceration does not disrupt educational or vocational activities, JOTF will carefully monitor the state budget to ensure the protection of funding for adult education as well as correctional education.  We will also work to preserve the access and affordability of the GED examination for incarcerated testers.

Maryland’s low-income workers need access to training in order to advance in the workplace and obtain jobs with family supporting wages.  EARN (Employment Advancement Right Now) seeks to create a coordinated system to advance the skills of the State’s workforce through a collaboration of industry, State and local governments, and nonprofits.  JOTF will work to ensure that the State maintain its investment in EARN and where possible, seek to expand the program and strengthen participation amongst low-wage, low-skilled workers.

For more information or to get involved in advancing any of the policies described above, please contactElisabeth Sachs, Melissa Broome, or Caryn Aslan.  To receive regular updates from JOTF during the 2016 state legislative session, please click here to sign up for alerts.