Established in 2015 by legislation, the Justice Reinvestment Coordinating Council (The Council) was tasked with analyzing ten years of state corrections and sentencing data to better understand who we have been sending to prison, for how long, and why. Representing a diverse perspective of criminal justice stakeholders that included legislators, judges, prosecutors, defense lawyers, law enforcement, and advocates, the Council crafted solutions for Maryland that would hold offenders accountable while reducing the state’s nonviolent incarcerated population. Simply put, the Council recommendations were based on data, research, evidence-based practices, and serious consideration of public safety. 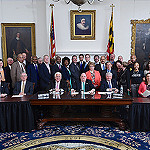 The Council’s recommendations were guided by startling stats that highlighted the dire need to do things differently in Maryland. The following were most shocking:

The recommendations became Senate Bill 1005 and House Bill 1312. Now signed into law, the JRA will save the state close to $200 million over the next decade, and we recommended that those savings be reinvested in drug treatment, community supervision, key reentry services to promote employment, housing, and educational credentialing, and other recidivism-reduction programming. The new law also provides for the creation of the Justice Reinvestment Oversight Board. This board, in collaboration with DPSCS, must determine the annual savings from the implementation of the recommendations of JRA based on the difference between the prison population as measured on October 1, 2017 and the prison population as measured on October 1, 2018 and how those monies are to be spent. Decisions on how and where to reinvest the savings will be guided by the recommendations of local stakeholders.

While the JRA is packed with loads of reformative initiatives worthy of praise, JOTF is particularly proud of the following provisions that were a direct result of our advocacy:

JOTF is all too familiar with the far-reaching consequences of incarceration on low-income families, toiling to eliminate employment barriers for Marylanders struggling with a criminal record. For years, men and women – young and old – have come to Annapolis, often in tears when describing their personal experiences: the jailhouse barber who is prohibited from barbering when released because of his criminal record; or a nephew serving a mandatory minimum sentence for selling drugs to feed his addiction or family. Time and again, we see families struggling to survive when loved ones are locked up. When finally released, they struggle to secure and maintain a stable job with a criminal record.

The message is clear: Overreliance on incarceration is not working. So, as the only nonprofit representative of the Justice Reinvestment Coordinating Council (JRCC), I was proud to stand with the Governor and the Maryland General Assembly leadership as they added their signature of approval to this massive overhaul of Maryland’s criminal justice system.

Maryland still has work to do to reduce the impacts of incarceration on working families. But, JOTF is thrilled that Maryland’s leaders heeded the call and took this huge leap in the right direction. We look forward to working with state officials and key stakeholders around the state to ensure effective implementation of the Justice Reinvestment Act.