If you were lucky enough to meet Project Jumpstart graduate Edwin Jones today, you would find a man that is determined. Steadfast in embarking on a career in the trades, he works in the elements during the day and attends apprenticeship classes two nights a week. You would also see a man committed to providing a stable financial future for his family, dedicated to his church, and community. However, invisible to you would be the obstacles Mr. Jones faced as he entered Project JumpStart two years ago: a large child support debt (owed to the state of Maryland), a state tax lien, an expensive auto loan on a car he co-owned with his wife, a revoked driver’s license, and his wife’s recent cancer diagnosis. 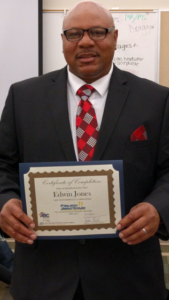 Despite these hurdles – Edwin was persistent. He was an exemplary student in Project JumpStart and after graduating he was quickly hired by a plumbing company. Since his graduation, Project JumpStart staff continued to support Edwin in restoring his driver’s license, purchasing a car, and getting his child support arrears forgiven.

Today, Edwin’s children are grown, yet Edwin still owed about $15,000 in state-owed child support arrears – which is not paid to the custodial parent or the child. He had been making weekly payments toward this debt for several years prior to entering into Project JumpStart. Prior to joining the program, Edwin was unaware of the Child Support Payment Incentive Program (PIP). This program, created by legislation that JOTF was instrumental in getting passed back in 2008, allowed low-wage workers to have their state-owed child support debt forgiven after making consecutive payments. In PIP, twelve (12) consecutive payments gets 50% of debt forgiven and twenty-four (24) consecutive payments gets 100% of debt forgiven. However, since its inception, the PIP program remained underutilized and participants were often too easily terminated – without any consideration of their fragile state of employment or income. Therefore, in 2018, JOTF revisited the PIP program by partnering with lawmakers to introduce legislation (HB1554) that restructured PIP to better facilitate more successful outcomes for its participants. Specifically, HB1554 allowed for several changes that enabled participants to better access PIP and stay in the program – including 1) requiring an online application, 2) a 6-month grace period for participants who became unemployed, 3) the grandfathering in of payments made immediately prior to joining the PIP program, and 4) an awareness campaign to ensure that Maryland residents knew of this great opportunity to have their state-owed arrears forgiven.

During the legislative session, Edwin’s testimony moved legislators the most, being both the sole PIP program participant in Calvert County and a Project JumpStart graduate. His story dispelled the myth of the “dead-beat” non-custodial parent and refocused on the reality of Edwin’s financial capabilities – and challenges. Shortly after HB1554 took effect on October 1, 2018, Project JumpStart’s Financial Case Manager and JOTF’s Senior Policy Advocate jointly drafted a letter to the Calvert County Child Support Administration on Edwin’s behalf, advocating for his state-owed arrears to be dismissed under the new law.

A month later, Edwin received the news that his state-owed arrears were completely forgiven. Then, a notice was sent to his employer to stop garnishing his wages. Edwin’s story is an example of what is often missed in the gap that policy and programming creates – policy is not always practical. However, through our collaborative approach, JOTF has been able to stand in this gap and leverage its unique partnership between policy and Project JumpStart to advocate effectively for our participants and all of Maryland’s low-wage workers.